I found it very fitting that a trailer for the live-action Beauty and the Beast movie played before Jackie, considering that Pablo Larraín’s biopic of former First Lady Jackie Kennedy depicts the former first lady much like the character in Disney’s beloved fairytale. Oh, but I’m not talking about the whimsical, good hearted Belle who sees the good in even the ghastliest creatures. It seems that Mrs. Kennedy has much more in common with the Beast: someone cursed for his own ego, living in a cold and empty palace with a reminder of his woes kept in a case always in his presence. While Mrs. Kennedy was certainly not a furry monster with horns damned by an enchantress’ curse, her wealthy upbringing and glamourous interpretation of life as the First Lady certainly fueled the confidence in her smile. But after a quarter of her husband’s head was blown to bits inches away from her on November 22, 1963, the White House that was her castle became an icy, vacant tomb of what her life was and she couldn’t escape the sorrow of her loss, whether it be the vacant chair in the Oval Office or sitting right next to her husband’s casket mere hours after trying to collect bits of his brains off of a car. But don’t worry, she made sure everyone knew she and her family remained every bit as perfect as she (or the American people) wanted them to be. In a way, Jackie Kennedy believed in beauty in the most beastly time of her life.

This is the balancing act that plays out in Jackie, a grim yet gorgeous character study of an American icon that got the dream and nightmare in the best and worst way. Jackie’s framing device is a journalist (Billy Crudup) interviewing the former First Lady (Natalie Portman) in Hyannis Port, MA for Life magazine in 1963, mere weeks after John F. Kennedy’s assassination. During the interview, Jackie is bitter and standoffish while constantly questioning Mr. White’s intentions and notes as she burns through cigarette after cigarette (though doesn’t want her smoking habits in print). While speaking her mind on everything from policies of the First Lady to the legacy of her husband’s presidency, the movie flashes back to various moments in her time at the White House. It shows the poise and grace of Mrs. Kennedy’s televised tour of the White House in early 1962 and the nights she danced to classical music with her charming husband. The main focus of the flashbacks kickoff on that fateful day in Dallas, with Jackie in her iconic pink dress holding her dead husband in her arms while her face and skirt have splashes of his blood on them. Even with her husband dead, she’s already planning a funeral with the same gravitas and pageantry as Abraham Lincoln’s. Surrounded by confidants including brother-in-law Bobby Kennedy (Peter Sarsgaard), longtime friend Nancy Tuckerman (Greta Gerwig), and a priest (John Hurt), Jackie tries to comprehend how she wants her husband to be remembered by the public and how to conduct herself after the love of her life is gone and if she ever loved her life at all. 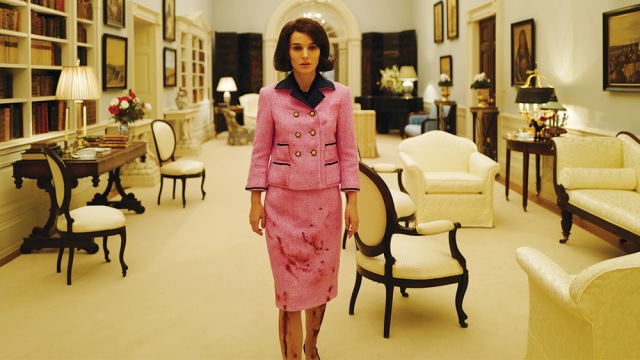 It would be easy to paint Jackie in the narrative of “grieving widow trying to be strong.” Larraín has that in his film, but it’s such a miniscule part of the story that it goes by nearly unrecognized. Instead, he sees more anger in Jackie than grief. She wants the public to see her shaken demeanor and somber face next to her husband’s coffin as punishment for the immense pressure and scrutiny they put on her and her family, practically blaming the people for JFK’s death (“They put him on ‘Wanted’ posters,” she says before rolling out JFK’s casket off of Air Force One). She’s also angry that after all of the effort to present herself as perfect as porcelain, all she gets in return is a dead husband and kicked out of her presidential palace. At the end of it all, she wonders who she did any of this for: her husband, herself, or the American people? It’s fascinating to see Jackie appear fiercely protective of her husband’s legacy one minute, micromanaging where he’ll be buried and how many horses will be carrying his coffin through Washington D.C., to drunkenly sulking around the White House in old dresses while a vinyl of Camelot plays in the background (because ain’t irony a kick?). It’s questionable as to how much of the scenes are fact or fiction, but Noah Oppenheim’s script is more about the ethics and morals of Jackie’s dilemma and letting the real events inform each decision. The movie as a whole is visually stunning thanks to cinematographer Stéphane Fontaine dimming the colors in the movie with a hint of gray. There’s also a good combination of sweeping wide shots of the barren White House or the JFK funeral procession and closeups of the characters under constant emotional stress, boosted by Mica Levi’s haunting string section in the film’s score. It’s Terrence Malick meets David Fincher, and it works surprisingly well.

But you know why you’re here: Natalie Portman…….HO-LY LORD. Portman is a force as the First Lady, capturing every possible side of Jackie’s personality at the time: the fiercely protective wife demanding the world honor her husband like he was King Midas, the broken-hearted lover grieving over the loss of her Prince Charming, the unsure rich girl on the verge of having the lavish lifestyle taken away from her. The most interesting segments of Portman’s performance is when she questions her own worth and her own direction. She speaks to the priest (in a great performance by Hurt) about wishing she could’ve married a baker or a store owner, questioning if all of the comfort of her life has been worth anything if it could go away so suddenly. Portman has the fragility of Jackie down, but turns that into a jaded form of rage as she tries to control something entirely unstable. Even through her tears, she controls each scene. And then the interview segments the journalist (Crudup, also exceptional) where she continuously snipes about what the American people deserve to hear about the assassination and how she coped with it all. Portman shows the layers of Jackie on full display and masters every single one. While it may not be as complex and disturbed as her Nina Sayers in Black Swan, her performance in Jackie marks another peak for her career and one of the best acting performances of the year. To complement that is a well-rounded cast of supporting performances from Skarsgaard, Hurt, and Crudup all giving ace performances. But this is Portman’s show and she owns it.

Jackie avoids the pitfalls of typical biopics by playing around with the order not only of the scenes, but of its title character. The movie lays out Jackie’s character like pieces of a jumbled puzzle, piecing bits together not exactly in the right order but regardless comes together at the end. When Jackie ends, I felt as if every possible question about Jackie Kennedy Onassis has been answered even if the movie is not a complete look at her life. But maybe that’s what one moment can do to one’s life, as corny as it sounds. After all, it shook an entire country, perhaps even an entire world. Imagine what it did to one person?
4 out of 4 stars

Tom Ford’s second feature film is a gorgeous soap opera/neo-noir revenge story that revels in the repulsive ways of man and woman.

Tom Ford seems to revel in making ugliness beautiful and beauty horrifying. The fashion designer, who moonlights as a writer/director, can use beautiful music and gorgeous cinematography to make grotesque women dancing nude seem compelling. On the flip side of that, his cold writing and barren set pieces can make the lives of the rich and beautiful seem like sad deformities of once-hopeful ambition. Both ways work to his advantage, especially when he makes a southern revenge drama within a broken romance drama as juicy as Nocturnal Animals.

The main story follows Susan Morrow (Amy Adams), a successful art gallery owner in the lap of LA luxury feeling adrift in her life. Her fancy home is nearly empty, her husband (Armie Hammer) is nothing more than a good looking +1 at parties, and her work leaves her uninspired. One day, she receives the manuscript for a book called Nocturnal Animals, something her first husband, Edward Sheffield (Jake Gyllenhaal) used to call her. Sure enough, the book is written by Edward and dedicated to Susan herself. She starts reading this fictional book about Tony Hastings (also Gyllenhaal), his wife (Isla Fisher) and daughter (Ellie Bamber) driving through Texas in the dead of night. The family run into a gang of unruly locals, led by smooth talking Ray Marcus (Aaron Taylor-Johnson), who harasses the family to cruel extremes. This horrible story makes Susan harken back to her relationship with Edward and what went wrong, while the novel tells Tony’s desire to vengeance with the help of a local detective (Michael Shannon).

It’s amazing how well Ford juggles the three stories he has in Nocturnal Animals. They all have acceptable amounts of screentime, though the third story of Susan and Edward’s relationship seems rather rushed and come off more like bullet points of moments rather than developments. Regardless, Susan in real time and the events of the book balance out, never connecting in the literal sense but definitely inspired by Susan’s dark reality. Ford uses Edward as a vessel for American hope and optimism, then crushes it with Susan’s equally American drive for success and how she’ll jettison anything that’s slowing her down, even if it’s her school girl crush. He mirrors that in the fictional book, testing how far Tony would go to see justice done and whether that makes him a man defending his family’s honor or just as animalistic as the men who made him into a coward. What makes every punch of the movie land hard is the triple threat of Ford, cinematographer Seamus McGarvey, and composer Abel Korzeniowski. Ford weaves neo-noir wonders with McGarvey’s excellent shots of the dusty Texas plains and the icy LA art scene while Korzeniowski uses haunting strings to bring tension and drama that borders on camp but is utterly entertaining. It’s as if Ford has made the best (and meanest) soap opera ever, and that’s not a bad thing at all.
Not to mention the charm coming from the stellar cast. Adams (on a hot streak with this following fall’s Arrival) revels in Susan’s shallow vapidness and despair. Underneath the couture dresses and eye shadow, Adams sneaks in genuine hurt behind her eyes when she realizes the failure behind her success. Even when she’s covered in glamour, Adams takes a sledgehammer to every character she does and breaks it down beautifully (especially in the film’s final scene). Gyllenhaal (no stranger to multiple personalities on screen) is great to watch as Tony, trying to comprehend his cowardice when he didn’t save his family and justifying the dirty deeds he must do for retribution. Gyllenhaal’s not breaking a sweat here, but he remains compelling throughout as a story motivator. Shannon and especially Taylor-Johnson both give chilling turns in their supporting roles that egg on the evil in Tony’s story. Shannon as the grisly detective and Taylor-Johnson as the smirking psychopath both act as extreme reflections of Tony’s decisions that scare him to death, showing that Ford sees no righteous choice.

Matter of fact, Ford doesn’t seem to see any good people in Nocturnal Animals. He seems to always find a dirty monster behind the high class and the average soul, and the lengths he goes to prove that point in his film is fantastic. Nocturnal Animals thrives in its mission to mate beauty and ugliness and see which one the audience sees more of. What did I see? Both, and I wanted more of each.