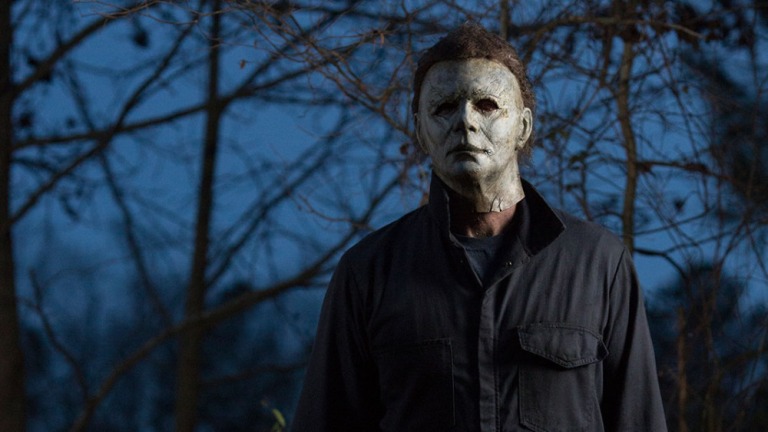 Scenario: Two writers have a story about a mysterious monster that creeps on the innocent at night. They don’t say why the monster is lurking about or how it moves from the shadows like the quietest whisper, but its presence and attack strike fear into the hearts of audiences. The writers create the ultimate boogeyman and the chase after it is both terrifying and transfixing. It captures the imagination and nightmares of people all around the world becoming an icon of its time and times soon after.

So the writers wrote a bloated but necessary coda to the monster trying to kill its prey once and for all.

The writers didn’t want to write anymore, so some other writers tried to bring the monster back to lurk again.

So another group of writers had the monster follow a little girl.

So then there was a death cult.

So then there was Busta Rhymes.

So then there were obvious rednecks.

Don’t be fooled by Halloween, the third reboot and the second remake of John Carpenter and Debra Hill’s original slasher classic. In fact, don’t even associate the word “original” with the new movie directed and co-written by David Gordon Green (Pineapple Express, Eastbound & Down). Despite it eliminating every other Halloween sequel from canon and being a soft reboot/sequel of the 1978 original, this is still very much a Halloween sequel. Whatever potential there might have been from having two podcasters (Rhian Rees and Jefferson Hall) coming to Haddonfield adding to their pseudo-Serial fame by covering the Michael Myers murders is thrown out the window for the same plot as the first movie: the hulking Michael escapes custody and returns to his hometown to slice up civilians on Halloween night. Despite the now-grandmothered Laurie Strode (Jamie Lee Curtis) using her trauma to become a hardened hunter badass wanting to put a bullet in Michael’s skull, the masked killer is mostly hunted by a random cop (Will Patton) and a psychiatrist (Haluk Bilginer). Sure Laurie’s paranoia led to her daughter (Judy Greer) cutting her out of her life and the life of her own daughter (Andi Matichak), but Michael doesn’t care since there’s teens making out and townspeople being unsuspecting so it’s time to start stabbing. 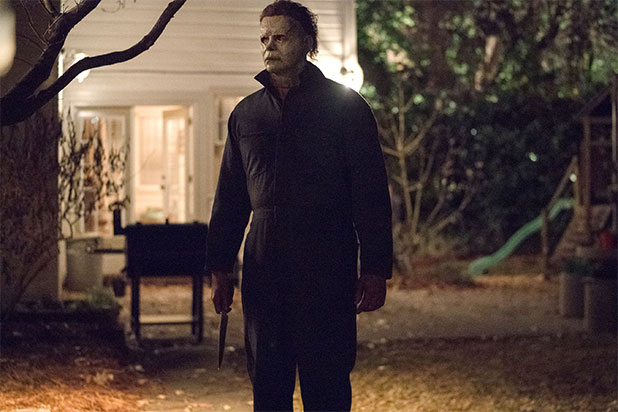 There’s astonishment to be had when a remake is 15 minutes longer than the original and it still feels rushed. Through a combination of rudimentary dialogue, speedy delivery and choppy editing, Halloween feels incredibly routine and mechanical in its execution. It’s as if God from Monty Python and the Holy Grail is shouting behind the camera to “GET ON WITH IT,” given how the movie rarely takes a break to set up tension or subtlety. Carpenter’s direction in the original movie made the audience pay attention and use dark shadows to find Michael in scenes, letting the viewers that saw Michael genuinely jump in their seats and those that didn’t see Michael freak out at the terror they don’t see. It’s like obeying and breaking the Jaws rule by both hiding the monster in the background but still showing him in clever ways. There’s only a handful of scenes where Green keeps Michael shrouded in the secrecy of the background to creep up on the audience. The rest of the time he has Michael strolling through the background damn-near waving at the audience to remind him that he’s in the movie. Green also rarely uses the power of silence in a horror movie as he can’t figure out when exactly to leave out the fine score composed by the Carpenters (John and son Cody) and Daniel A. Davies so he puts it in a bit too frequently. Green blessedly doesn’t over indulge in jump scares, something the original Halloween did but sparingly and with intelligence, and does have some genuine moments of spooky ambiance in certain scenes thanks to lighting and brief moments of silence. Sadly they’re too few and far between to leave an enjoyable impression.

Another element cutting the movie off at the legs is the script. Rehashed main story aside, the “new” elements that have hyped up the new Halloween feel like just that: hype that doesn’t hit. The true crime podcasters that open the movie trying to interview Michael in an admittedly creepy setting are merely just additions to Michael’s body count and don’t bring a different viewpoint to the story. Despite having three generations of female Strode women in this movie, Laurie’s daughter is a two-dimensional whiner that does little else but feel embarrassed for her mother or cry in concern. Laurie’s granddaughter is merely the typical high school teenager dealing with relationship drama and the odd fact that her granduncle might be a serial killer, as any high schooler does these days. Most disappointing of all is Laurie’s arc herself, switched from the victim in hiding in the first reboot Halloween: H20 to the avenging warrior lying in wait here. For all the talk of Laurie’s character change addressing trauma victims and how to turn that into strength, Halloween has no room to dive deeper into what her mental state did to her life after Michael was put away and what else makes up her personality. Laurie Strode is only defined by her extensive collection of rifles and her long granny hair. The lack of definition also applies to the movie’s antagonist. There’s no mystique or analysis left to waste on Michael Myers but all killers need to have some type of motivation. Even something as lame as Leprechaun had a reason for its tiny terror to attack people (a stupid reason, but a reason). Halloween 2018 merely sees Michael as pure evil, nothing more and nothing new. What else is he going to do? Hell and outer space are already occupied by another masked killer of teens anyway. 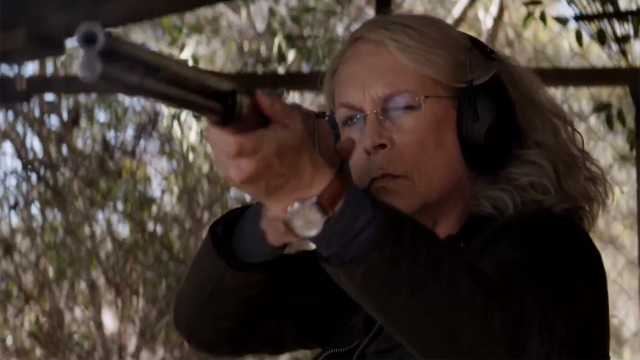 The bigger shame than the characters not being given much else to work with is the solid cast wasted in this. Curtis looks like she wants to really explore this different take on Laurie Strode and she makes the little given to her work as a sadder, bitter Laurie trying to take charge of a terrible situation. Even with her more sullen demeanor, Curtis is as charming and likable as she was 40 years ago as a spunky babysitter. Patton has always been a reliable supporting actor and he brings his expected southern grit to the role despite also not being given much to do. Greer is wasted in another franchise property (that happens a lot) by being nothing but a worry-wart and Matichak is only used for something Michael to chase.

It’s fitting that the opening credits of Halloween features a smashed jack-o’-lantern re-assembling itself since the remake is trying to make the old and broken fresh again. Sadly the new Halloween is less fresh and more stale by recycling the same basic plot of the original movie (and most of its sequels) and leaving all of its new ideas underdeveloped. There’s specks of creativity peppered in here but it’s not enough to excuse the fact that we’ve seen this movie before, multiple times in fact. It’s barely scary, occasionally funny, sparingly creepy but all-around unsuccessful. How many times can audiences hear the same story and ask for it again? In the case of Michael Myers, apparently 10 times. That doesn’t mean it can keep a viewer from looking as tired and bored as Michael’s mask does.